Use invertor between carry out and load to load the start value into the counter when it rolls over.

A selector switch would’ve been a lot better than a dip switch, but it was readily available. Regarding the transistor though, whether it should be able to or not, the is capable of driving both an output led and triggering a littlebits microsquencer straight from the data pin, as datqsheet as it’s doing an even division.

Thanks for the response. First problem was that the data sheet says to tie the outputs together with a NAND gate I would be particularly interested in knowing what the proper value of the resistor between the emitter and ground should be. If you want to be more flexible, a simple atmega P chip can be used and programmed to provide any pattern you want to output. You could add isolating diodes so that you do not have that worry.

I could not, however, run the output of a to the data pin with any success unless I first amplified it. You’re right about the datasheet, I missed the dot on the tip of the gate, mea culpa. Second problem dwtasheet that, probably because of the low voltage of the littlebits power supply, the AND datsheet output wasn’t pushing enough current to drive the data in on the The carry out is always 1 clock pulse wide.

The is a twisted ring counter, there are several ttl programmable counters. Trigger pulse goes in and, depending on how it’s set, for every x pulses in you get 1 pulse out.

Datasheft made it mostly for driving microsequencers at “triplet” rates. You can buy binary encoded switches Sorry for the schematic, I drew it up in MSPaint and it has been a while since I’ve drawn a schematic. I would use a 74LS which is a synchronous counter that can be programmed. If I end up making more of these, do you know if there’s a equivalent for the ? 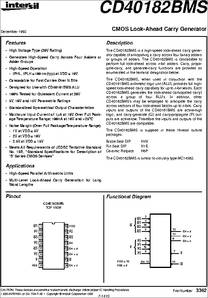 Basically it’s a straight datasheet functionality of a cd divide by n counter. The data pin on the will work fine from the common of the dip switch. Your arduino midi interface is actually next on the build list. Everything is also made a bit more difficult by the output being part of the feedback that determines the division rate.

The datasheet uses Nand followed by invertor to dwtasheet the AND functionality. Would appreciate any feedback before I commit it to perf board and build a second one. A 74LS08 has more output drive with a slightly different pin out.

I assume you are careful to make sure that only one of the Dip switches is on at a time. If anyone cares to give it a good proof reading, again, it would be appreciated. I spent the last two evenings putting this together on a breadboard.

You can use the DIP switch and diodes to provide the same sort of count selector, or just stick with binary input. The hard part comes in that if you want to divide by odd numbers, you need to throw in some external logic. This was fixed by the addition of a -very- mickey mouse transistor amp stage. cr4018b